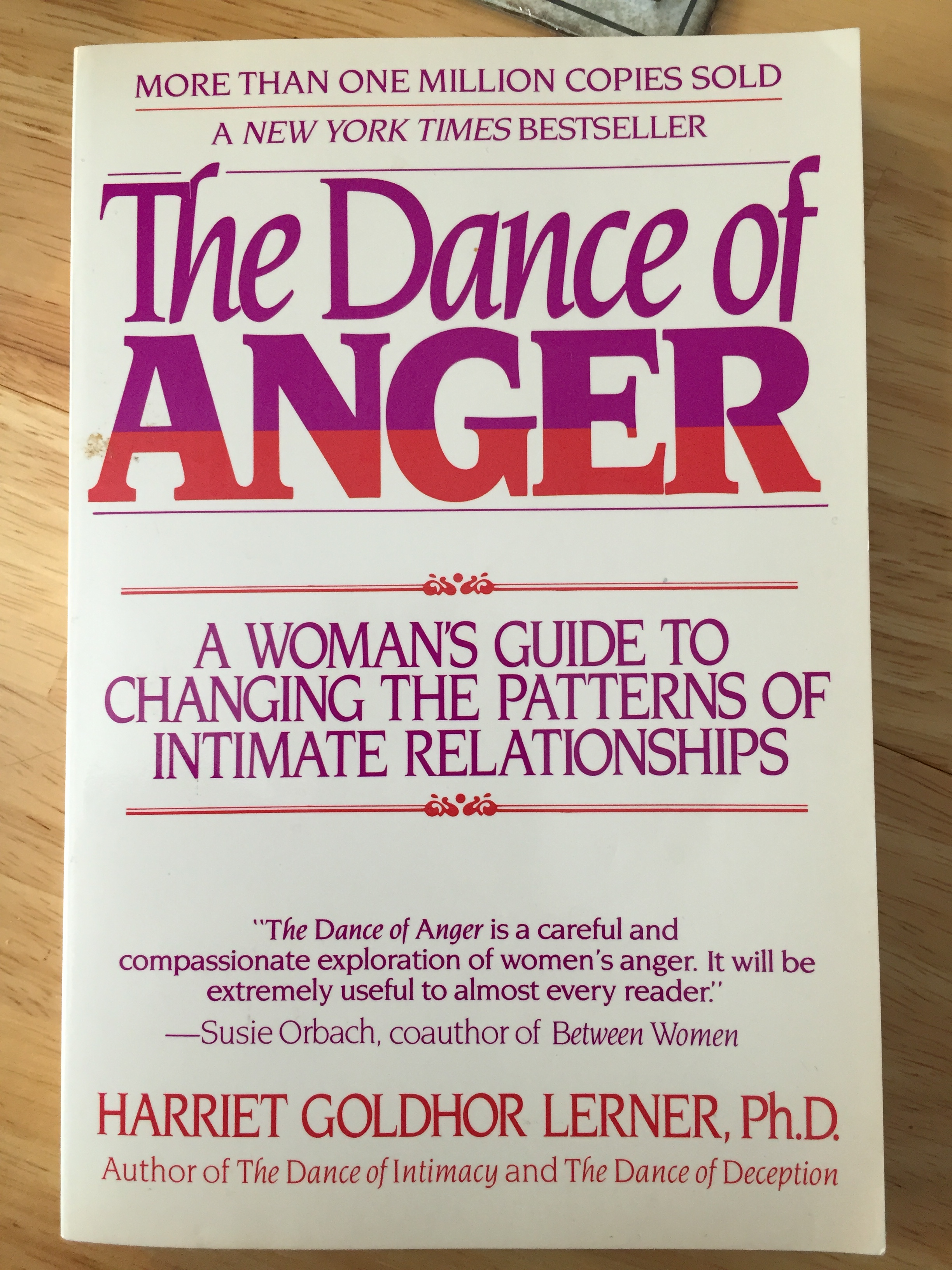 I stood in front of the case as my eyes passed by The Dance of Anger by Harriet Goldhor Lerner, Ph.D.  a half-dozen times. After all, I’d just written about Slaying Anger Dragons a few days ago. Understand, I’d *just* read Tom’s book too, and had finished it only hours before I wrote the post. It was – perhaps – one of the few times in my life that I felt I had a handle on the anger beast. At least a little.

So – that day – I wrote about another book.

And then, the day before yesterday, I stood in front of the case yet again… and again, noticed Lerner‘s book about anger. I passed it by.

I said to myself, “Self, none of my hundreds of self-help books appeal to me right now. Let’s not write today.” And so I didn’t.

And so, for the first time in a very long time (and that time, I’d been on holidays) I skipped writing for two whole days.

Yesterday, I had an adventure across the border. I had decided to give my parents a second iPhone I had sitting around the house. I know, weird. Who keeps a working (though unused) iPhone around the house? Me, evidently. Anyway, they need one and I had this perfectly good one, so wanted to gift it to them. It took (no kidding) two months to get it unlocked, wiped and ready for mailing, since they live way over there in USAland and I live way up here in Canadaland.

Anyone who tries to mail something from Canada to the US knows it’s gonna get waylaid in Customs and might be opened, taken apart, broken and/or lost. BTDT. So, I wanted to mail it from Stateside where it goes in the box by yours truly and is opened by my parents. Period.

Understand, I have never driven over the border by myself, for good reason. My anxiety hits high gear in authority-style situations and the only thing scarier than border agents are IRS agents. Trust me on this one. It really wasn’t as bad as I expected until I got to the other side, where I got myself promptly and completely lost. People, being lost by yourself in Buffalo is a rare treat. There was laughter. There were tears. Seriously.

Anyway, it’s normally a five minute drive to the Post Office but for me, yeah, it was a half-hour. But I found it! I had to buy some surprise accoutrements for boxing and such but got ‘er done (yay! My parents are gonna be so jazzed!).

Then I wanted to find a grocery store because I can get some things (like my beloved Starkist tuna) that I can’t get in Canada. Oh-my-gerrrrrrd, where was the store? Where the HELL was the store? Forget it, I said to myself. I’m going home.

The pot holes. The boarded up buildings. The troll under a bridge. It was bad. For at least another half hour, I drove hither and yon and back again. I recognized nothing except possibly a guy featured on Dateline (not sure) but finally… finally… I got myself back to the border. Conversation between the border guard and me went like this:

He: How long were you here for?

He: Why were you here?

Me: To do some shopping. I got lost and couldn’t find the store. So I decided to just go home.

He: Are you coming back?

Me: Not without my husband!

He hands me my traveling documents and I kiss the ground (figuratively, of course) as I head home. I stop at the grocery store to pick up some stuff (including store brand tuna which is NO Starkist) and finally, park in my driveway.

I had packed a reusable grocery box with my groceries and the stuff from the post office. The box has soft material handles, which had somehow turned under the bottom. As I lifted it, the entire box turned over and emptied into my backseat, on the floor and on the driveway.

My next words were:

Today, as I stood in front of my bookcase, I didn’t hesitate. I picked up the book that had been mocking me for days.

The Dance of Anger by Harriet Goldhor Lerner, Ph.D. is about women’s anger.

Whatever you do, don’t NOT read it. Otherwise, God or the Universe or something is going to show you why you need it. Just sayin’.

Follow The Self-Help Whisperer® on WordPress.com
Join 5,029 other followers