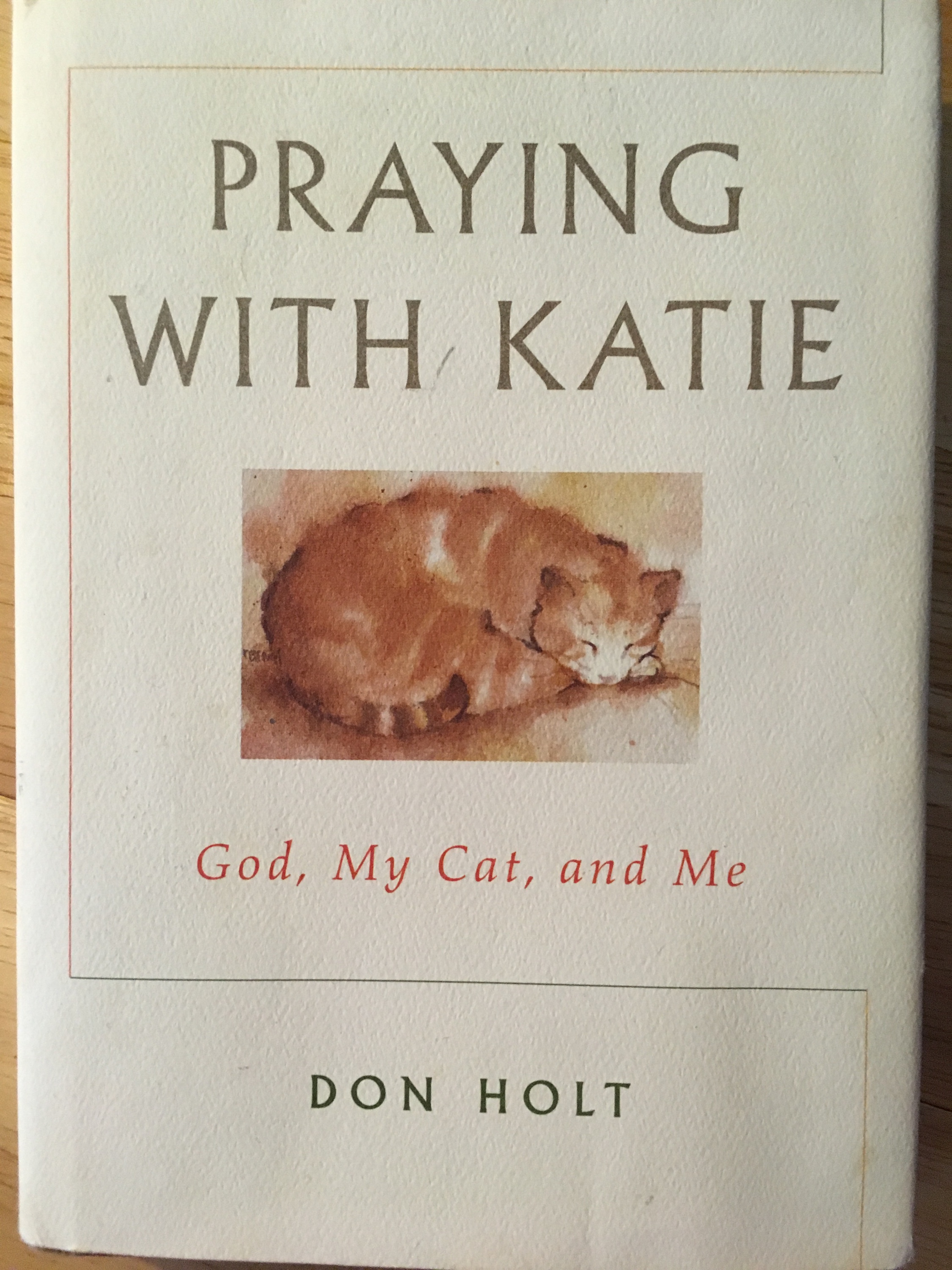 Go one way, and you’d be downtown where old brick and mortar buildings were warm and welcoming. They hosted street performers in the summer and horse-drawn carriages at Christmas. There were tea shops, boutiques with candles, bath salts and potions, the local library and the fancy dress shoppe where I bought my wedding dress.

Go the other way and you’d hit the big city with skyscrapers, theatres, museums, and bus and train stations taking people to wherever their hearts desired.

Our place was truly right in the middle, between the two. Across the street was a fantastic plaza with everything we needed, which was a good thing because I was alone a lot without a car while my husband worked. I could walk over and visit a farm-to-table grocery store, beautiful drug mart, the Hallmark store…  and my favorite haunt, a book store. It was small but mighty.

Praying with Katie by Don Holt is a small volume, not much bigger than the average paperback, though it is a hardback. The front cover has a lovely waterpainting of Katie (the cat) and the paper is a matte ivory, which gives it a linen look. The subtitle is: God, My Cat, and Me.

I turned it over and read the back, which talked about the author being unemployed and depressed… which sounded a lot like me at the time. I’d moved from California to Canada to be with my (then-new) Canadian husband. We’d been naive. We were in love. It blinded us to some realities, one of which was what it would take to get me working in my new country. Then the September 11, 2001 attacks happened while my immigration papers were in process… and the 45 day wait took three years. So, I couldn’t work. We were struggling financially and in other ways, as many second marriages do, especially rebounds, which ours was. Lots of baggage to unpack. Lots. But that’s a story for another day (or never).

I remember opening the book and reading a few pages. I couldn’t put it down… but I had to. I couldn’t afford to buy it. So, I came back, day after day, and read a few pages.

It is hard to comprehend the emotional, cognitive and spiritual states of this cat when she just sits and stares. I assume she is interested. […] She seems to like to do it but attaches no great importance to it.

For me she becomes a model of contemplation. Simply to sit at God’s feet and gaze, trying neither to understand nor to influence, seeking neither to realize joy nor unload grief, simply interested in watching God be God.

As you can see, I now have the book. There’s a story about that, too.

I’ve never met Cindy in person but we’ve known each other for nearly twenty years. She is one among a handful of women I met online at a website back in 1999-2001, who have stayed in touch all these years. Don’t tell me you can’t love someone you’ve never met in person. I know for a fact it isn’t true. Cindy is proof of that.

Cindy bought the book in 2001, inscribed it and sent it to me. I treasure it. Every so often I get it out and read it again. I just love it. Not just because Cindy presented it to me (with love at a time I needed it most) but because I’m a cat person… and a feeling person… and a person who struggles with organized religion but hangs onto my God with clenched fists.

This was never meant to be a self-help book, per se. But it’s a book that has helped me find the connection between my cats, my God and me. I call that self-help. 🙂

Originally written by me on January 25, 2018 for this blog