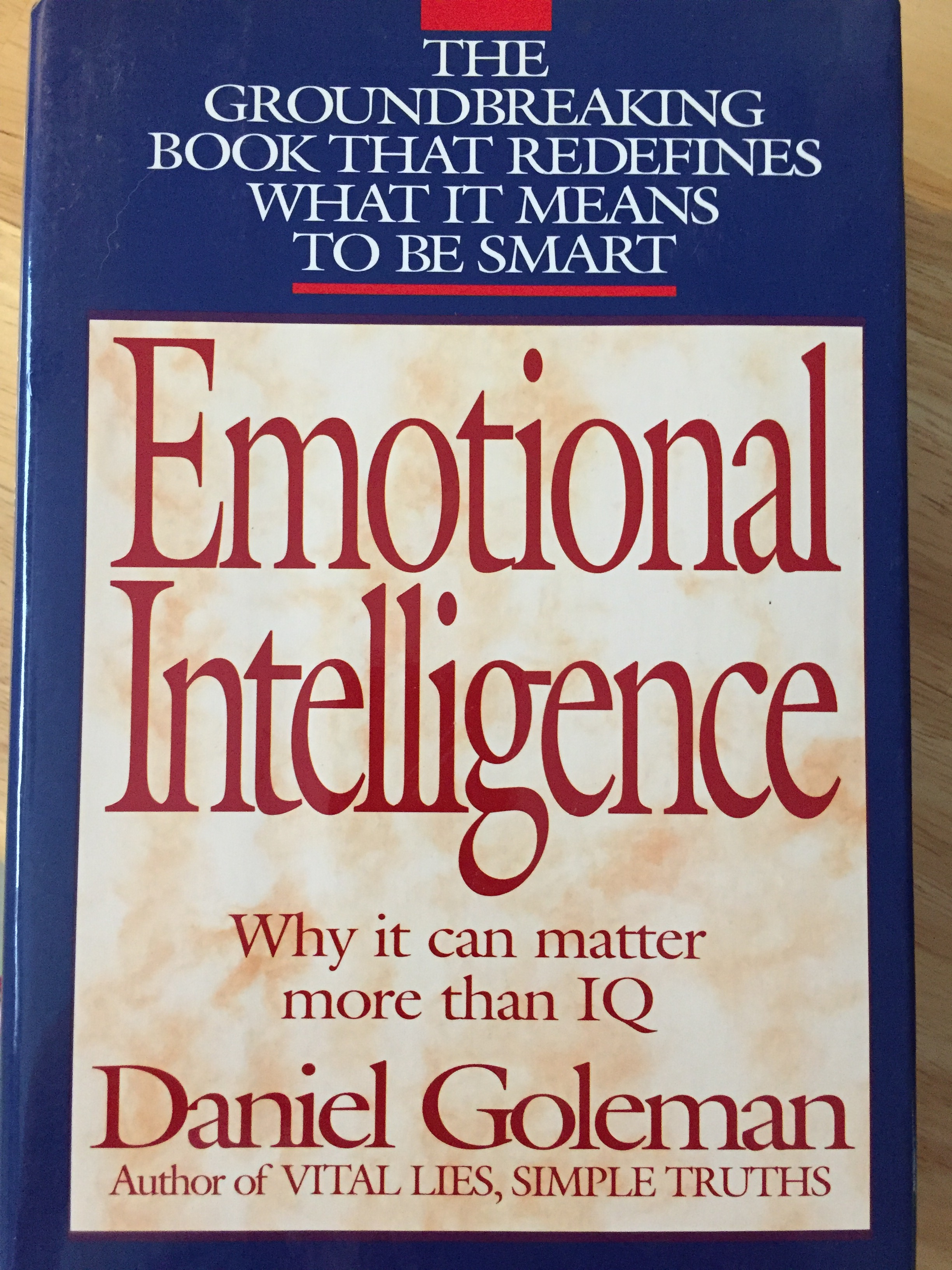 My IQ is modest. My common-sense is pretty-much nil. But my emotional intelligence? Well, let’s just say it works better than the other two combined.

Emotional Intelligence  by Daniel Goleman is the kind of book that can change your life. I know I say that about a lot of the books… but dang, there are a lot of good ones out there!

This is one of them!

It’s packed, double-packed, jam-packed and stuffed with more information than you can imagine. While it’s easy reading (not scholarly) it is so dense with material that it could take a month or more to read. I don’t remember how long it took me… but I remember reading it in chunks.

For all that, there is no “test” in the book. I thought there’d be a test! I could be wrong. I read this book many years ago, so I just may have forgotten that it’s tucked deep in chapter 12. I couldn’t find it today, though.

So… I’m sharing the online version of Goleman’s EI test with a caveat: I clicked on the test, which took me to someone else’s site. I feel compelled to share the original test by the author, of course, but if it doesn’t work, there are many, many different versions of Emotional Intelligence tests online. A reputable one is on Psychology Today’s site.

Emotional intelligence (EI) differs from general intelligence in many ways. I could very easily write about that… but it’s not where I’m going today.

To me, as one of the original “Heed your impulses” kinda people (thank you ADHD and anxiety!) there is thread I really appreciate and it that weaves throughout the book. Goleman says it best: “There is perhaps no psychological skill more fundamental than resisting impulse.”

This is something I have struggled with… more than anything else in my life. And by that, I mean: in my ENTIRE life.

It’s funny, because just the other day, I read about The Marshmallow Test in another book, though I can’t remember which one! Don’t you hate when that happens? Mostly, when you’re reading a stack of books at the same time. Do you do that, too? I can be reading a couple of self-help books, a fiction and listening to another book in my car while I drive… concurrently. In fact, that’s pretty-much the norm for me. But I digress.

The Marshmallow Test is also written about in this book. So, what is it? You can read about it at the link above or enjoy my very simplistic answer: Give a 4-year-old child a choice: one marshmallow now or two if you wait fifteen to twenty minutes. Test the emotional and social difference between those same children years later, as they graduate high school. The studies showed that those who delayed gratification at 4 were generally more able to cope with life. (That’s my simplistic explanation, anyway.)

To be clear, at 4, I would have grabbed the marshmallow (and probably everyone else’s) and eaten them all at once. Upon graduation from high school, my report would have said that I was not coping well with life and also, would NOT like to discuss my problem with impulse. Also, marshmallows.

It is something I still struggle with. Big duh. Just look at my zillions of books and my body. I grab at as much of life as I can… with both hands… and NOW. In a way, I live in excess. Not money. Nor alcohol. Or drugs. Food. I live in excess with food. That last great hill to conquer.

At which point, I’ll have life all figured out.

You really think so?

To whom am I speaking? Who answered? Who knows. Let’s just go with it!

This book helps to build a foundation… and we all know how important that is! If it’s later in life for some of us… it’s okay. We can begin HERE and NOW.