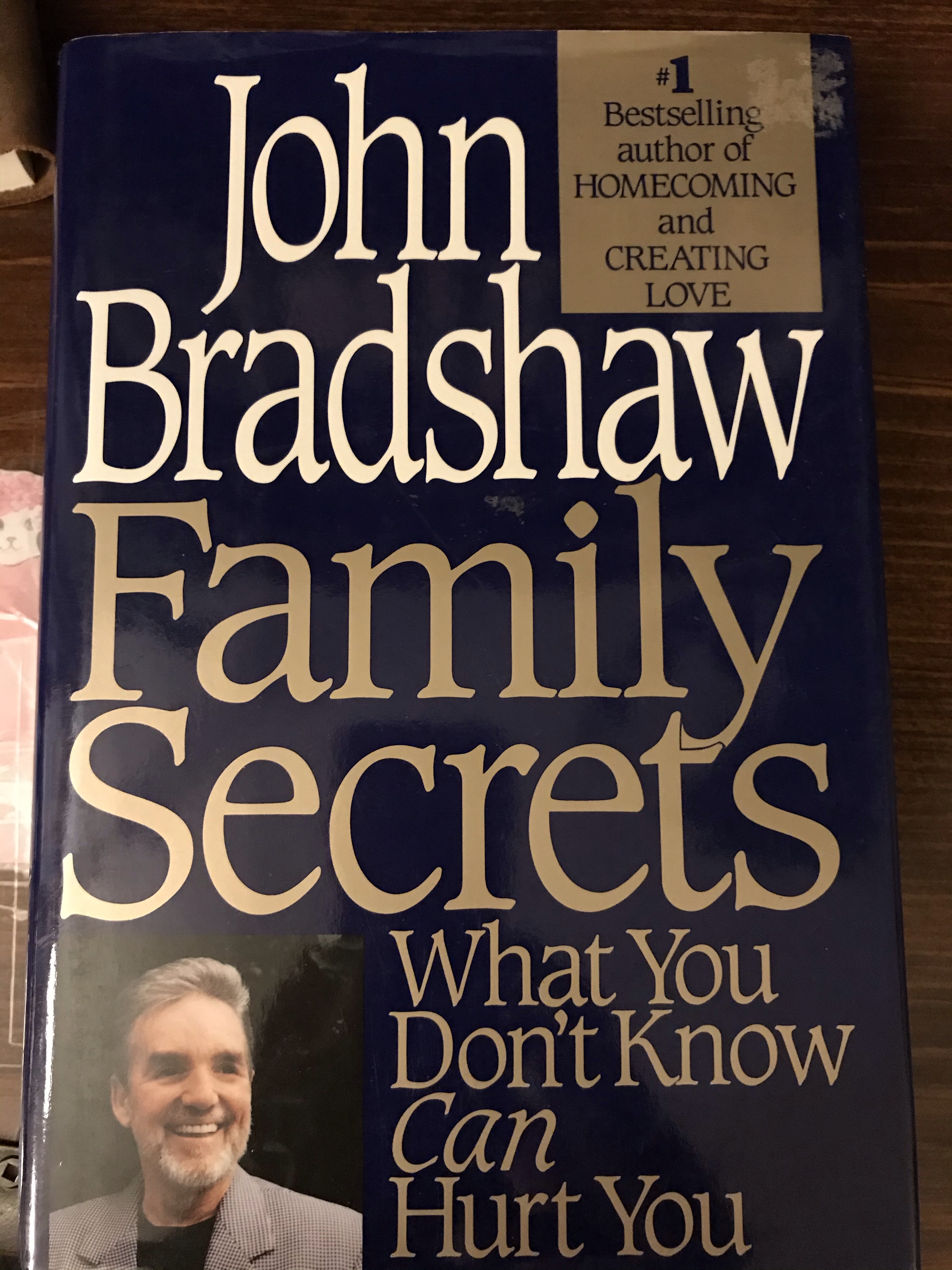 John Bradshaw was not a newcomer to the self-help landscape when this book came out, nor is he a newbie here on my site, as I’ve written about a couple of his books already.

I’ve also written about secrets before. Mostly about how secrets aren’t safe.

Family Secrets by the late John Bradshaw (d. May, 2016) is an amalgamation of everything discussed thus far.

I’ve hesitated talking about this book. In fact, other books that have touched on some similar ouchie spots of my own childhood and relationship with certain family members have been talked about only occasionally and to be honest, very carefully. In the case of one book in particular (Will I Ever Be Good Enough?) I was nearly sick pushing the “Publish” button.

See, here’s the thing: I find myself in a very precarious position. While I want to share the book(s) with you… because they’re very important… I do NOT want to delve into my personal stories with regard to the subject matter – for myriad reasons. In short, am I protecting my privacy and that of other people I love? Or, am I being secretive? And… why?

I read this book many years ago, along with a few others, for a college psychology class about family dysfunction. Today, as I went through it again, I remember feeling out-of-body the first time I read about enmeshment, triangulation, and other ways family secrets perpetuate themselves. Why? Because I’d lived them.

One – my son, who drove off a cliff in 2011, has told me he doesn’t appreciate when I talk about his suicide attempts (yes, more than one). This is his story, of course, but it is also mine, as I have told him. Still, the only reason we know about it is that the medication he was given for pain (he’d broken his clavicle in the crash at the bottom of a ravine, among other things) loosened his tongue and he told us the truth. When the police questioned him, he said an animal went out on the road and he swerved to miss it. They said there were no skid marks. He stuck to his story. They asked again and again. He refused to tell them what they already knew. Nothing more they could do. He rarely talks about it. I want to talk about it … to keep it from happening again… not that I have any control over that, eh?

Two – As an adult, I found out that my grandmother’s Italian family removed the “i” from the end of their last name to “American-ize” it. It simply wasn’t discussed! Why? Was it something to be ashamed of? I don’t understand and she’s no longer here to ask.

Three – I’m gonna bring up the dumbest thing here and simply ask your indulgence. You know how my husband and I are Murder She Wrote fans? Well, a running theme throughout the seasons was that someone’s reputation was being smeared or besmirched or some-such-thing and therefore, someone had to die to keep it from coming out or cover it up. Whether it was about a baby being born out of wedlock, an adoption or a crime from the past that was covered up wasn’t the point. The point? REP-U-TA-TION (said just like that!) is everything.

And so, how do I talk about a book called Family Secrets and not talk about my own family secrets? Some talked about rarely… others never mentioned…

And some, perhaps, not faced at all?

AND DOES IT MATTER?

The subtitle of the book is: What You Don’t Know Can Hurt You. Is that really true?

Being on the internet, as I am, presents a whole ‘nuther kettle o’ fish. Everything is spewed out here… for the most part… and the notion of a reputation being ruined over something like a child being born out of wedlock is laughable. I know of several families (with children and without) who never married and nobody cares.

These days, it takes something like the ‘metoo’ movement to ruin careers, and yes, reputations. That’s worth ruining a reputation over, in my opinion! And yes, secrets were kept.

Sexual secrets are some of the most heinous and there are *right at this moment* people suffering in families because of them… not MY family, thankfully… which is why I hesitate to lump all secrets together. <<< This is my only critique.

So, yes, books like this are still necessary. This is one of the very good one’s on the subject. Bradshaw himself was a stellar author and human. Pretty much anything you pick up by him is worthy of your time!