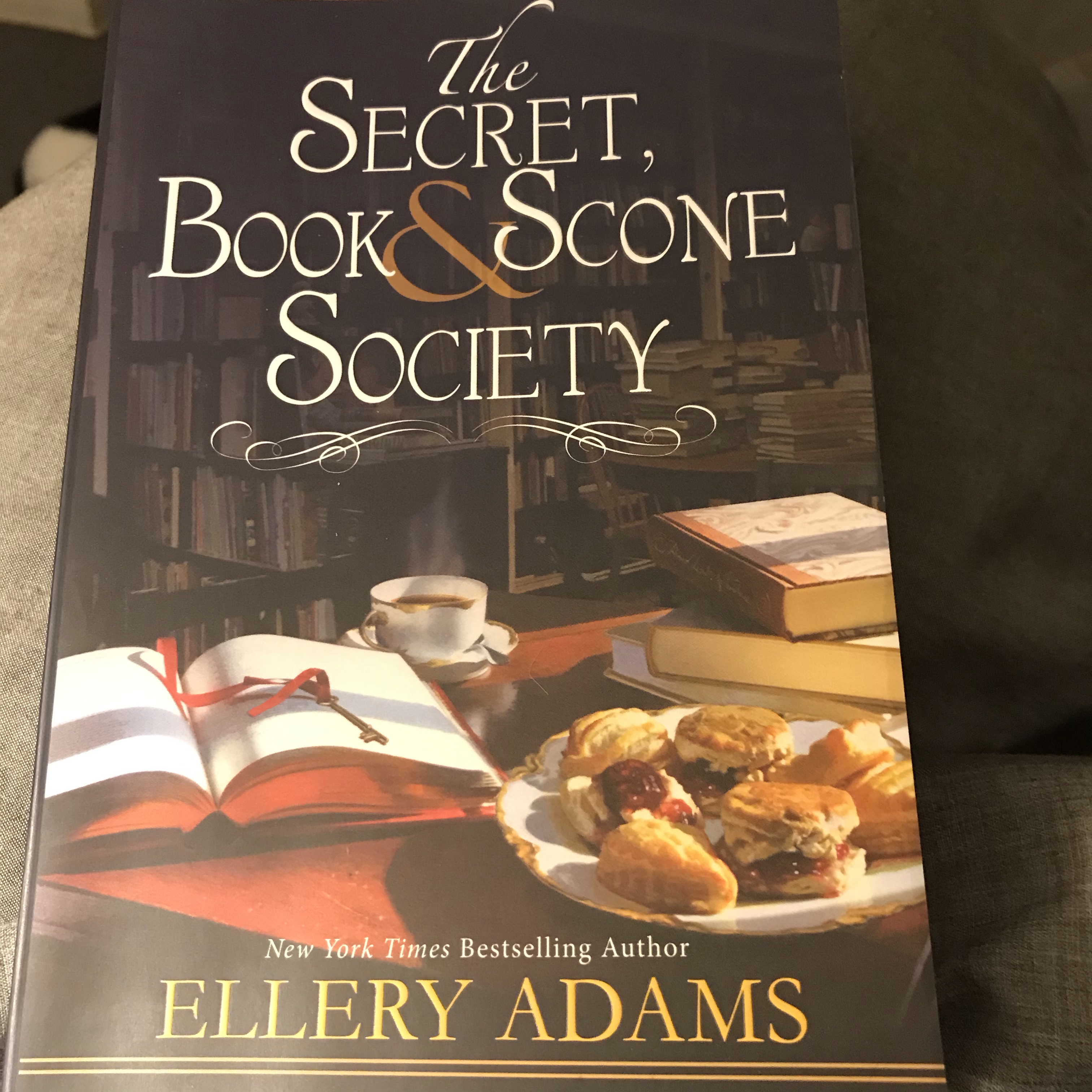 As soon as the healing takes place, go out and heal somebody else. – Maya Angelou

The Secret, Book & Scone Society by Ellery Adams is the first in a series but for me, it could totally stand alone and in fact, does (at the moment, anyway) as I have none of the others. Yet! I’ll get them one day. For now, I’m still in the afterglow of having just finished the first one. I was reading until after midnight!

The thing is… I just couldn’t put it down! I had to find out… NOT who the killer was, though I was interested. Nope, it was about the secret. See, the “Secret” in the title is not because the Society is secret. It’s because the four women who make up the society each have a secret. We’d learned three of the four by the last chapter of the book. Each, devastating. Painful. All, shameful and Shame-filled.

The last secret was locked away… literally… and we didn’t find out about it until the Afterward. But I’m getting ahead of myself.

On the surface, this looks like an unassuming cozy mystery: a small town, scones, books, a group of women and a … ahem! … murder.

But Miracle Springs, North Carolina, is not an ordinary town. Though, there are natural springs. You probably guessed that.

The scones are not ordinary, either. The baker is – well, magical. Maybe a bit psychic. She simply bakes what each person needs to be reminded of simpler, happier times. A little cinnamon, orange, clove or vanilla… you can imagine… can’t you? Like, how apricot takes me right back to the knee of my grandmother (my dad’s mother) because she had apricot trees and made loads of preserves. In my mind’s eye, I can see her in her kitchen, wiping her hands on an apron she made herself. She was a spectacular seamstress!

The Book(s) in the title speak for themselves throughout the pages. There are quotes at the beginning of chapters but the real fun comes because our protagonist (the bookshop owner) is a Bibliotherapist, which I’d never heard of until about three months ago. And, let me tell you… once I did hear of it, I’ve thought of little-else but how to tie the modality into my blog-life-mission! But I digress… except NOT… since it all ties together.

The Secret(s) in the title belong to four women who have been wounded in different ways and have trouble trusting, which makes friendships with other women (and relationships with men) awkward. They are the bookshop owner, the baker, a hairdresser and a spa attendant from the Springs.

Then, of course, there’s this guy who dies. Except, he too had secrets and woundings. He originally came to Miracle Springs for nefarious reasons. Instead, he dared to reach out for something we all want (and certainly the women in the Society want it, too!). It’s one of my favorite words – Redemption. He was so close, too. Until he… uh… fell… on the train track just as the train was coming in. Or was he pushed? That’s the mystery.

Oh, there’s also a love story or two. Nothing over-the-top, icky or cloying. I promise!

Everything about this book called out to me and I’m not going to forget it any time soon.

This is why I have a grouping of Fiction as Self-Help on this blog space. So very often, lessons are learned in interesting places… faces… voices. Stay open-hearted, dear readers! Fiction is full of self-help!!

The very last chapter (before the Afterward) had a quote that summed up the book (and my feelings about it) perfectly:

Ring the bells that still can ring
Forget your perfect offering
There is a crack, a crack in everything
That’s how the light gets in