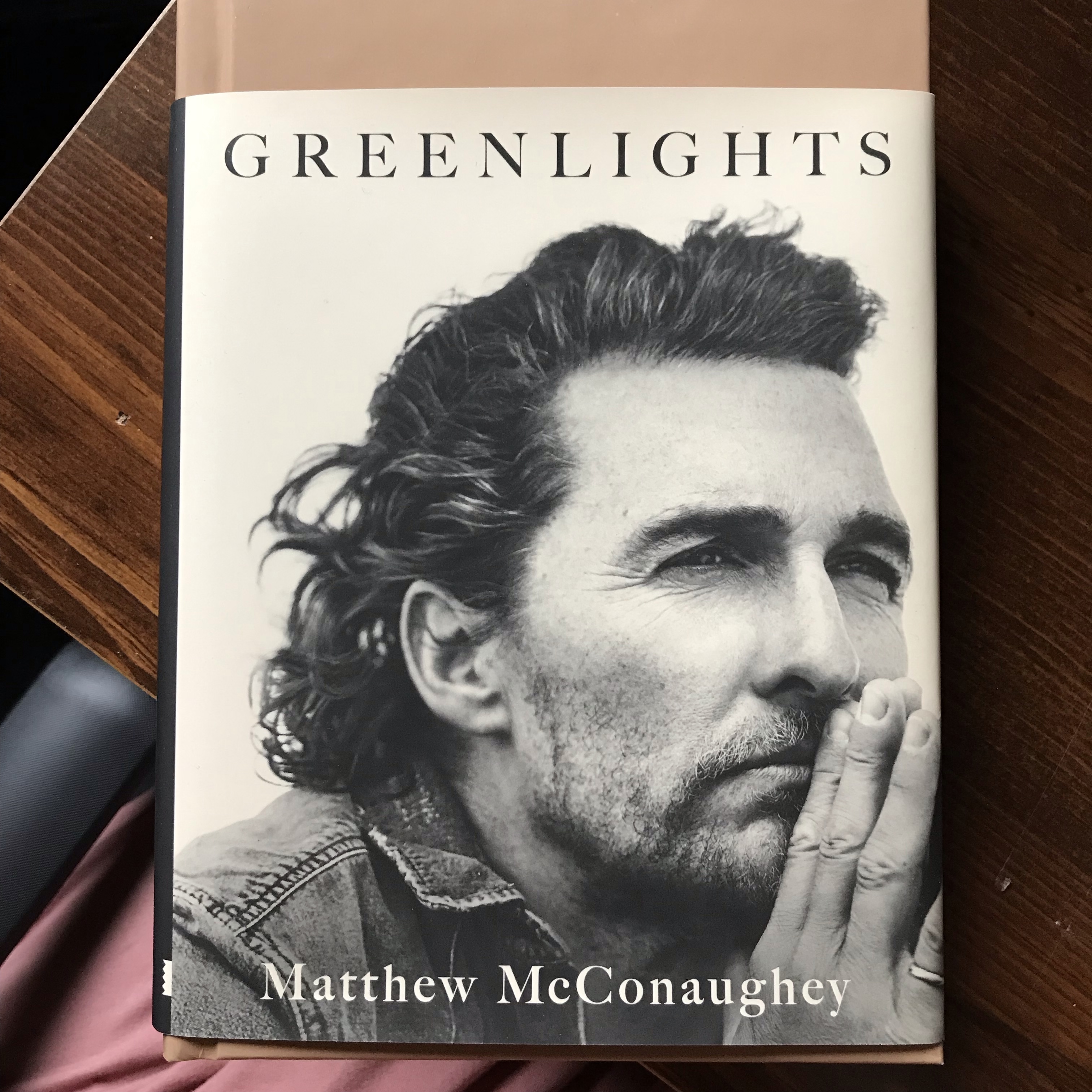 You know how some people just rub you the wrong way? (And here, I would be remiss not to mention that there are a million-zillion women – and probably men, too – who would LOVE McConaughey to rub them ANY ol’ way. I know a few of them!)

Anyhow, McConaughey, as we used to say, just wasn’t my cup of tea. So, generally, I didn’t have any idea what he was up to, nor did I care to find out.

So, why would I pick up this book? Good question. The answer is that I heard him, oh, about a year ago, talking about his memoir: Greenlights. There was something so engaging about this older, wiser McConaughey that I didn’t turn away, or turn the channel. He was calming, charming and smart. Was he always this way? What had I missed?

Seems I’m not the only one to notice, as he’s simply all over the place these days.

In fact, only a couple of days ago, in a NYT article, where he calls himself, “… a statesman-philosopher, folk-singing poet,” he also toys with the idea of running for Governor of Texas.

Well, dang! Who coulda guessed? Not me, that’s for sure!

But let’s get to the book…

You know how you say you “can’t put a book down?” No kidding, folks, I picked it up one day and finished it the next. I could NOT put it down!

Why am I talking about it here? On The Self-Help Whisperer®? Because, as I so often say, memoirs are stories of people’s lives and we can learn so much from them! This one? More than most. And, I’m NOT kidding!

Greenlights (yes, one word – on purpose! You’ll have to read it to find out why *wink*) when mentioned in the book, are in green font and scattered throughout the book. We all know what a green light means on the road.

“In our lives,” McConaughey says, “they are an affirmation of our way.”

Oh, they’re so much MORE, too. Where do I begin?

I LOVE what he says right at the beginning of the book, about everything. Yeah, tall order, everything. He says, “I believe everything we do in life is part of a plan. Sometimes the plan goes as intended, and sometimes it doesn’t. That’s part of the plan. Realizing this is a greenlight in itself.”

I have said (yeah, over and over) that everything happens for a reason. This ^^^^ yes, this, is what I mean.

This actor that I basically disliked for the last thirty years has just spoken to me… FOR ME… and I am humbled.

I did one of my cardinal sins – or is that the bird? wait (insert Jeopardy music here – the distractions of an ADHD’er never stop!) It’s correct – I turned the corner of pages that said something so profound that I needed to go back to them. In going back through them, I wonder what I saw on several of the pages. I didn’t highlight or underline.

But one page – 249 – stands out and is obvious. McConaughey says, “When facing any crisis, from Hurricane Katrina to a family emergency, to the profound choices we have to make in life, I’ve found that a good plan is to first recognize the problem, then stabilize the situation, organize the response, then respond.” (All bolding his.)

I know we should know this innately, but, uh… well, as you may know, I personally have some trouble in emergency situations.

Just ask my kids about the time an earthquake hit and I nearly knocked them over running to the front door, and also left my three year old son in the bathtub. Oh yes, they laughed and laughed.

Or ask my husband about the time someone fell in a tourist town we were visiting. It was clear we needed an ambulance. Someone said, “I’m calling 911” and I yelled back at the top of my lungs that THEY couldn’t call 911 because I was going to do it, as soon as I got in the shade where I could see my phone. No shit people, I was running, trying to find shade. My husband kindly led me way from the crowd, who were thankfully more worried about the victim than this mouthy woman worried about her self-esteem.

Word to the wise: DO NOT count on ME in an emergency. Yee gads!

As the book concludes, McConaughey also talks about the blessings of quarantine, where a red light stopped us in our tracks and led us to some greenlights: taking inventory and finding a better way forward.

Everything in-between is his story. The whole thing… from childhood to 50, where he sits right now. He talks about discipline (from outside and in), values, investments, humor, pain, relationships, work, life and death…

And if I were going to describe him? I’d say he is self-actualized. <<< A word from way back in my psych classes which means:

Self-actualization is the complete realization of one’s potential, and the full development of one’s abilities and appreciation for life. … Self-actualized people have an acceptance of who they are despite their faults and limitations, and experience to drive to be creative in all aspects of their lives.Sep. 4, 2020
Self-Actualization | Simply Psychology

It was hard-won and he deserves it.

It sure will be interesting to see if he jumps into the political ring!

So, have I changed my mind about him? Oh, yes. The man has earned my respect. And his book is fabulous!