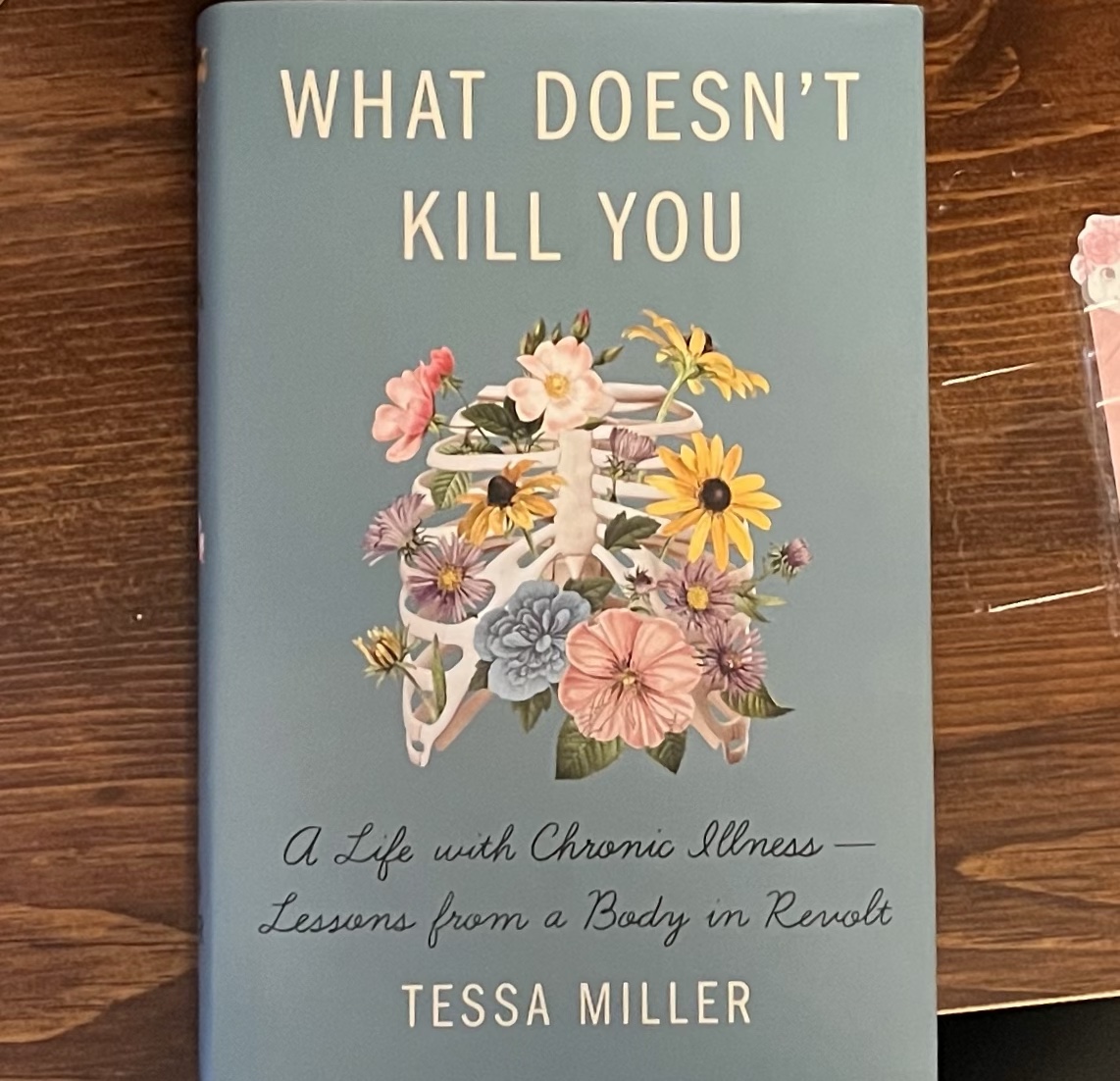 “The dividing line between the land of the well and that of the sick is an often blurry one, and Miller documents life on its uncertain borders with clarity and force.” – Anna Merlan, as seen on the back cover of What Doesn’t Kill You

It isn’t often that I begin a post with a review of someone else. Hey, there’s a first for everything!

Merlan’s quote so aptly describes what I have always felt… but couldn’t put into words… about being sick… but not sick enough… or well enough… or… what? That is the question.

What Doesn’t Kill You by Tessa Miller grabbed my attention from the moment I saw it. The cover art is beautiful in greens and pinks, and the illustration of a ribcage with flowers made me think that despite the title, this would be an uplifting book.

It is! But I’m getting ahead of myself.

Outsides and insides (of books and of bodies)… I use this description with full cognizance because it is the crux of Miller’s message.

Also, and I can’t stress this enough, getting to the point of understanding can – and often is – a convoluted, painful, frustrating journey involving way too many people. It is, after all, YOUR body we’re talking about here. Or in the case of this book, Miller’s body.

This is a memoir that could be a textbook on the intricacies of a body fighting against itself and the emotional toll of knowing – FINALLY KNOWING, sometimes after years of suffering – that you will *never* get well.

Hard pill to swallow – and not at all positive-sounding, is it?

Yes, of course, you will find ways to *live with it* (whatever it is) but not before you make deals with your body, the doctors, God, and maybe even the devil.

Miller did all that… and more.

She is an excellent writer – and researcher. There are tons of footnotes and an extensive index, you know, for a memoir.

From the front inside cover: “Today, an astonishing three in five adults in the United States suffer from a chronic disease—a percentage expected to rise post-Covid. Whether the illness is arthritis, asthma, Crohn’s, diabetes, endometriosis, multiple sclerosis, ulcerative colitis, or any other incurable illness, and whether the sufferer is a colleague, a loved one, or you, these diseases have an impact on just about every one of us. Yet there remains an air of shame and isolation about the topic of chronic sickness. Millions must endure these disorders not only physically but also emotionally, balancing the stress of relationships and work amid the ever-present threat of health complications.”

Shame. There it is again, as it so often is these days. Why would we feel shame about something we have no control over?

I could write a book.

AND! It’s *every bit* a self-help book, too! With excerpts like this, I’m sure you’ll agree.

What if my colleagues resent me for, say, working from home?

Miller goes on to say that “you don’t owe an explanation about your illness to anyone”. <<< Direct quote from page 201 in the chapter about work. But let’s get real… it’s the truth about anyone and everyone in your life. Am I right?

Miller’s health journey takes over one hundred pages to resolve. And by “resolve” I mean to be diagnosed with Crohn’s Disease, but not before she planned for her death. And well she would, as she was literally a shadow of her former self, having gone through YEARS of misdiagnoses. Once diagnosed, there are other considerations… who to tell… when and if… unsolicited advice… finding balance… acceptance…

That’s what this book is all about.

Towards the end, she discusses something that is so familiar to me in a chapter called, “Seven Secrets”. She speaks of her love of writing – how it gives her a sense of power in the midst of power that’s been lost in illness. It is a way to “not disappear” and this (of course!) speaks to me of legacy, one of my favorite words. That’s what this space – my space here in a corner of da ‘net – is all about!

I’m going to share the 7 Secrets without elaborating (with her words or mine) in the hope that it gives you a push to dig deeper for yourself.

Do you know someone who is sick all the time… who you don’t understand… perhaps don’t “believe”? Are you always trying to “help” them move beyond their illness, to buck up, and be positive?

This book is a must-read if you or someone you love has a chronic illness. The Appendix is filled to the brim with resources and ideas. Also, don’t miss the chapter at the end detailing “Experiences of Joy”… and keep in mind that neither this book (nor I) are suggesting that joy can’t be found in the midst of chronic illness.

And here, at the very end of this post, I will say that as a person with chronic illness (more than one, actually), I have spent much of my life trying to overcome, rise above, do this or do that “in spite of”… with a smile on my face… being watched… ridiculed (did I mention the time my “friends” t-pee’d the bathroom at work, haha, after I’d had a particularly horrible bout of spastic colitis, haha?)… judged.

It gets old. Especially after all this time.

Ah yes, I have my own gods and demons… in fact, right now, I am fighting the urge to give into my fears about a follow-up medical test. Yesterday, I found out it’s more extensive than I originally thought. See, it’s not just physical illness that is chronic, it’s mental health, too. Combine the two and you’ve got quite the stew. Talk about shame – and we certainly could.

What doesn’t kill you, indeed!