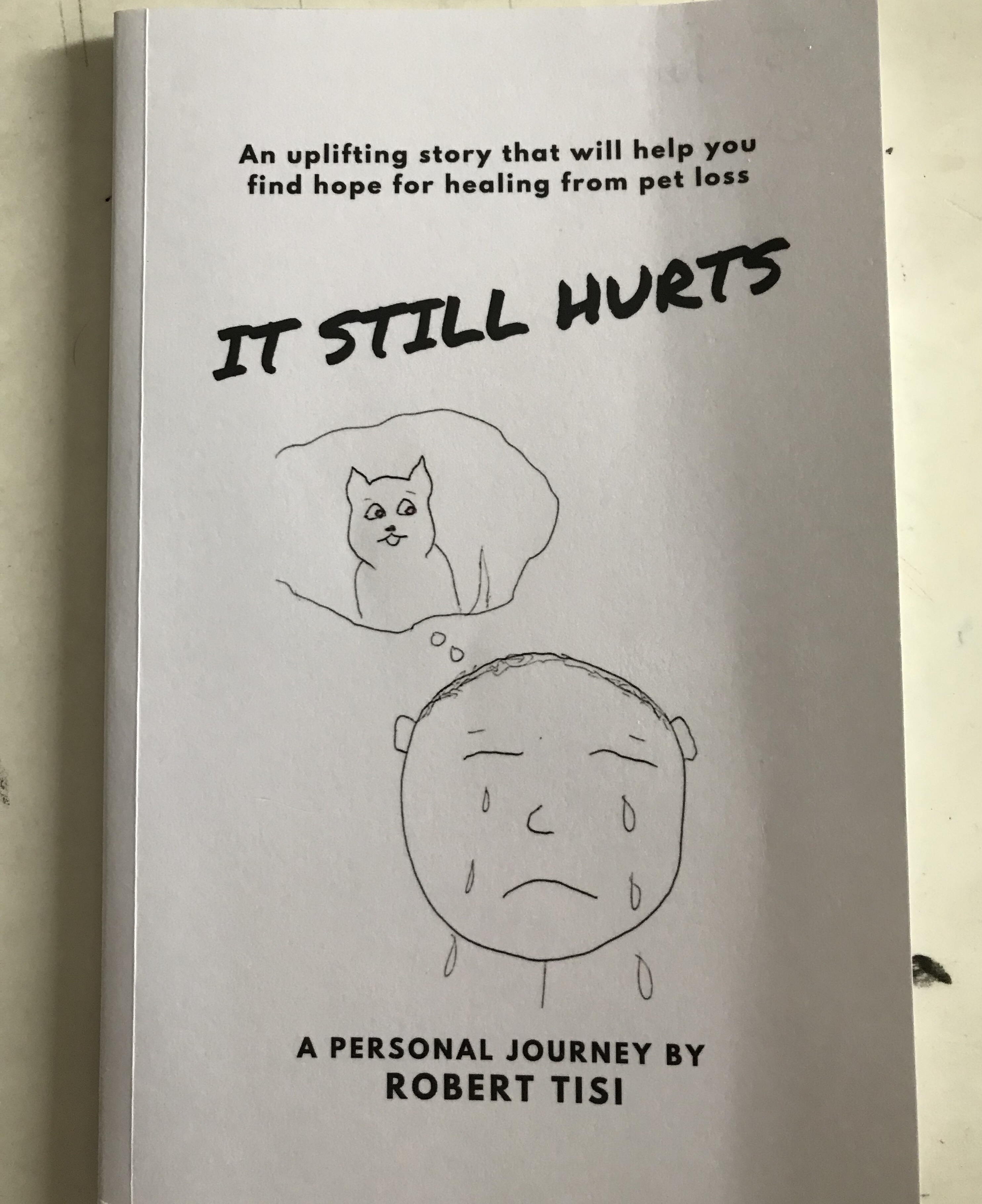 This blog space is filled with life experiences, stories, and books that deal with grief. It is not a new subject for me or anyone else. It’s our human experience. We love. We lose. We grieve.

Then why is it so difficult to talk about?

I was offered It Still Hurts by Robert Tisi by the author. He and I both belong to a Facebook group dedicated to supporting each other through the death of a pet. It’s a private group and most of us only know each other inside the group walls. It’s certainly the case for Robert Tisi and me.

My husband and I joined the group at its inception because we are friends with the facilitator, Marybeth Haines (MB), who also wrote a book about pet loss which I talked about a few years ago – here. More accurately, we became members of the group because we’d suffered the loss of our beautiful cat, Tess.

I’ve also talked a lot about Tess on this blog – Every mention of Tess is here. All you need to know is that she was our savior with fur, a Daddy-lover, and an excellent listener who died a horrible, painful, unnecessarily difficult death at 15 yrs old because she was misdiagnosed with diabetes when in fact she had cancer. That was almost five years ago – next month, in fact.

For years, we blamed the vet (who we dismissed and never visited again) and ourselves. We thought of the needles we poked into her and the limited bland diet… all trying to lower her glucose levels. In reality, we made her situation much more painful. It still punches me in the gut, to be honest.

I’ll tell ya though… nobody really wants to listen as I go over it again and again. Loss is often like that, isn’t it? I know a woman who lost her young adult son in a violent car crash. At first, she was silent. Then, for the next year or so, she was on Facebook with a photo a day of her precious boy as an infant, a toddler, a teenager, and adult. Photo after photo after photo. At first, there were lots of hearts and encouraging words. Then, less. People don’t know what to say in the beginning… or the middle… and most of all… after. After what? After the time that they expect you should be over it. Or, at least, can get through a day without thinking about it. Predicably, one day it just stopped. Because we who grieve know – don’t we? – that nobody wants to hear it anymore.

It is the same for all who grieve. We plow through and push it down or we let it out and can’t stop that waves. Or maybe, we stand knee-deep in it and try not to fall over as the waves come in.

Tisi has his own stories of loss and grieving and he recounts them in this tiny book that is his personal journey to healing.

It’s short and to the point: Grieving the loss of a pet is as profound as any other loss and needs to be experienced and respected.

When I say this is a short book… I mean… 40 pages or so. There are some excellent resources in the back but the bulk of the book is a conversation between friends…

Just Bob and you.

I found myself weepy in a few parts and smiling in others. And I’ll be honest… I haven’t felt this way about a book for quite some time. It definitely touched on some pulse points and reminded me of some of my pets from the past. Let’s see… there was Babette, Favorite, Winnie, Libby, Pepper, Barney, Ginny, Friskie, Buster, Tabitha, Boaz, Naomi, Tess, Missy, those whose names I’ve forgotten and those who traveled through our lives like Dot and all the birds, guinea pigs, mice and ferals who roamed the desert neighborhood. To all of them, I say: If I could do it all over, I would respect you more, look into your eyes more, listen to you more, and love you more.

Follow The Self-Help Whisperer® on WordPress.com
Join 5,021 other followers