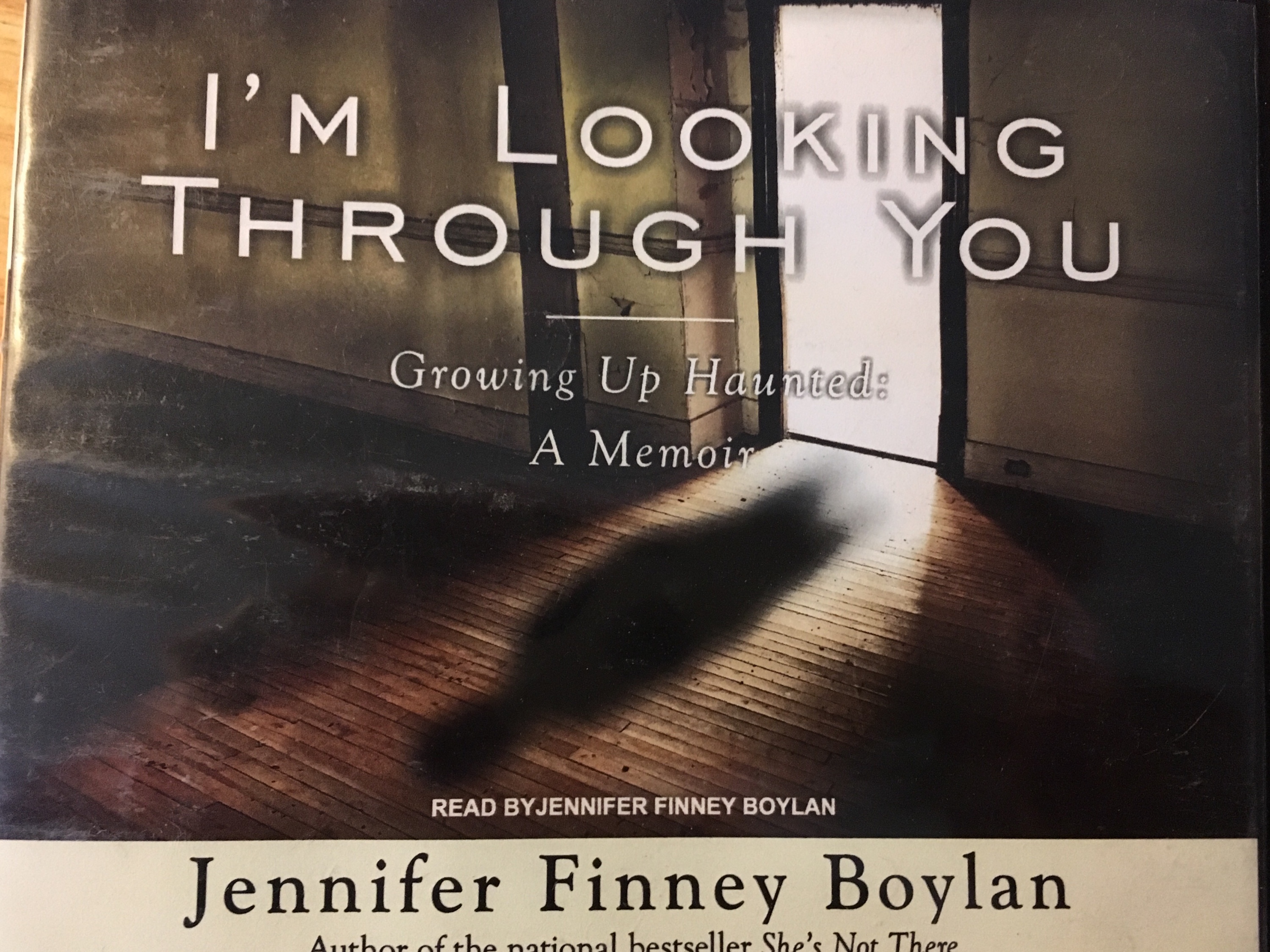 Jennifer Finley Boylan is an amazing woman! Before picking up this audio book at the library, I’d never heard of her. I listened to it and then – by a stroke of luck – the audio version was among a whack of Books on CD for sale at the library. No kidding, I spent $1. (Please don’t hold that against her. It has nothing to do with the worth of her book – it was a duplicate at the library. To me, it is one of my priceless books.)

It got my attention because of the title: I’m Looking Through You … and then the subtitle: Growing up Haunted: A Memoir. For some reason, it pricked at my heart. Actually, I know the reason… I grew up feeling that many people I cared about were looking through me… not because I was invisible but because I was so big. I was so big that nothing else *could* be seen. It’s a whole ‘nuther kind of invisible.

I was also haunted, a stranger in my body. It’s also part of the reason I have health anxiety/ hypochondria. I have no sense of what’s normal in my own body!

If you’ve read Boylan’s first memoir (She’s Not There) you will know why she felt haunted. Or, perhaps you’ve seen her as a GLAAD BOD member. If neither of those ring a bell, you may have seen her in one of her more memorable and public roles, as one of Caitlyn Jenner’s “Voice[s] of Reason” (according to the Daily Beast, linked).

Jennifer Boylan is transgender. It doesn’t matter. The only reason I’m bringing it up is because it’s why she felt haunted. Her house was haunted too, which is another big part of it. She weaves the two stories together seamlessly.

Her book made me laugh… and cry, again and again, as I recognized my own struggle with my body, shame and feeling haunted in my own skin. Our stories may be different but our struggle is universal. Anyone who struggles (especially with gender identity, disability and/or obesity) will tap into the language of sorrow, embarrassment, secrecy and finally, freedom.

For me, it was mostly about being fat. It was also about being loud. And ADHD. A handful. My family was not fat, loud, ADHD or a handful. They were perfect. I was not.

I felt like the odd girl out and in fact, family photos of us often had the three of them over here… and me, alone …. over there. An unwanted houseguest, an embarrassment, the only one with a chubby face and brown eyes in a household of blue-eyed beautiful people.

It doesn’t matter what they actually thought because *I believed* I was different… or worse…”less than”.

I’ll tell you a story about my husband that he’ll cringe at… and I apologize in advance to him. Soon after I moved to be with my husband in Canada, we went out to eat at a small restaurant in a tourist area close to Niagara Falls. I can’t remember what we needed but I “yelled out” that we needed whatever it was (the check, salt & pepper? Can’t remember.) My husband was *horrified*. They just don’t do that here in the land of polite society. I was immediately and terribly embarrassed. I cried a little. He apologized. We talked it out and were fine before we even drove home. But talk about a trigger! There I was being too big, too loud, too much.

Have you ever felt that way?

If so, a book like this may trigger something painful… or liberating… or both. For me, it helped to break free from the ghosts and goblins from my past.

And by the way, in case you think I’ve changed to suit anyone. Not. I’m still “too everything”. Turns out, the people who love me… love me as I am. Who’d a thunk it?

Follow The Self-Help Whisperer® on WordPress.com
Join 5,130 other followers